How To Start A Fire by Lisa Lutz 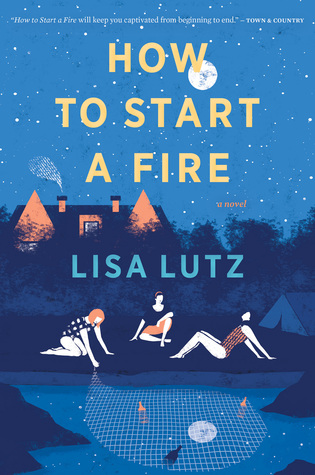 “Who would you save in a fire, Keith Richards or Pete Townshend?”

“The answer is Pete Townshend. A fire wouldn’t kill Keith Richards.”
Lisa Lutz – or more specifically, The Spellman Files – had been on my radar for eternity. Same as this one. I have no idea what made me finally pull the trigger. Maybe my recent discovery that I like to do more than just dip my toe in a certain genre . . . .

Or more likely the case, because I liked the cover when this popped up for the hundredth time somewhere in my online life. Because let’s get real. I’m a pretty easy sell . . . .

Whatever the case, How To Start A Fire wound up being one of my library checkouts that I went into with pretty low expectations since it was a mixed bag with my Goodreads friends. The story here is about three women and their ever-changing friendship from college through middle-aged. You have Kate – raised in Santa Cruz by her Czechoslovakian “deda” after her parents died in a car crash when she was 8, Anna – silver spoon sort from Boston by two still-married parents, and George – Chicagoan, only child to an Italian-American father and WASPy mother. All three of them have one thing in common . . . .

The only thing I could compare this to when my husband asked what it was about was . . . .

It’s kind of about nothing at all, but much like the occasional TBS marathon of that old standard, I found myself still sitting there fully invested 14 hours later.

3.5 Stars because the timehops were KILLING ME, SMALLS! Eventually I figured out it was best to read each chapter like its own little vignette instead of trying to piece together some semblance of order and hoped that everything would tie together in the end . . . which it did. If you are a fan of stories about flawed people who you can’t stop hoping will wind up with happy endings, this is a winner.

Note - I actually read the Kindle version, but with the good cover that is only an option for the paperback version. THIS is why I hate all these damn different version options here. Well, that and the fact that NO I HAVE NOT READ EVERY DANG BOOK TWO OR THREE TIMES THANK YOU VERY LITTLE. I just suck at technology so every time I click something I make it look like I did.