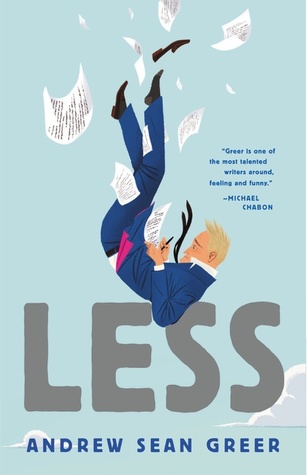 “Just for the record: happiness is not bullshit.”
I picked up Less for one reason and one reason alone . . . . .

The story here is about Arthur Less. Quickly approaching 50 with one former partner dying and another getting married, Arthur feels he has no choice but to do one thing . . . .

Except the staying in more part. No, on the contrary Arthur will be going out more. A lot more. And all over the world. From Paris to Berlin to Morocco, Arthur will become quite the globetrotter in order to avoid facing the facts that he’s not getting any younger . . . or more successful . . . or better at relationships.

Less has the hardware that proves unarguably that I read it wrong. I don’t even have a valid reason, either, because the “off the top of my head” excuse why I didn’t fall over myself loving this one is that I didn’t really relate to Arthur. Obviously I can’t truly relate to all of the meth manufacturers, moonshine runners, cannibals and serial killers who manage to make their way into my cold, dead heart either, so like I said – invalid argument. I guess my main problem with poor Arthur was . . . .

I guess there’s no place in my life for middle-aged manchildren. It still gets 3 Stars, though, because even I couldn’t eff up and read it wronger than that ; )
Posted by Kelly (and the Book Boar) at 7:30 PM