Jar of Hearts by Jennifer Hillier

When Georgina was only sixteen she thought she had found her one true love in Calvin. Things didn’t work out quite as planned, though, and he turned out to be a serial killer known as the Sweetbay Strangler. His first victim? Geo’s best friend, whose remains went undiscovered for 14 years. Once the body is discovered all sorts of skeletons starting falling out of closets.

After reading Creep by this author, I knew I would need to seek out more of her stuff in the future. Good news is, I convinced the pornbrary that I cannot live on smut alone and they recently purchased some of her other books. Great news is I totally broke all the rules about how to act like a decent person and begged for an ARC of this one because stabby stabby in love with a freakin’ murderer?!?!?!?!

I. JUST. COULD. NOT. WAIT. for publication day. But then I was terrified I would hate it and get blacklisted from all ARCs for eternity and also probably receive an e-mail saying I’m the reason why I can’t have nice things. Luckily the first didn’t happen and seriously I would not blame anyone for doing the second. Simply put in order to prevent a whole lotta spoilsies . . . .

“In every story, there’s a hero and a villain. Sometimes one person can be both.”

Occasionally I fantasize about what I would fill my to-read suitcase if I got to go to someplace like Mallorca and do things like this . . . . . 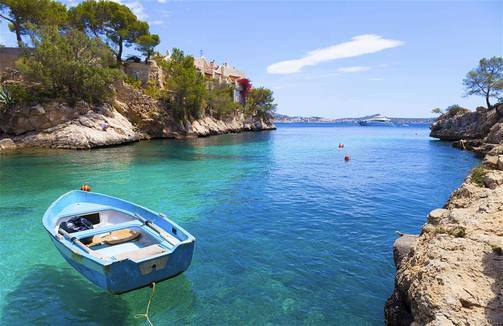 Rather than sitting in the middle of a sweltering dust bowl of a baseball diamond in Kansas watching my kids play ball all summer. Jar of Hearts is the type of book I want in that suitcase. I’m giving it every star. I couldn’t put the dang thing down and I was completely enraptured by alllllll of the different aged Geos I got to meet. I did figure out the first “twist” pretty quickly, but am happy to report I was a little slow on the uptake regarding the big shebang at the end and didn’t catch on to that until it was pretty much shoved in my face.

Oh, and in case you’re wondering: Yuuuuuuuuup. I have absolutely been singing Christina Perri ever since this arrived in the mail. My family really appreciates when I get to the part where I screech belt out . . . .

I probably could get a golden ticket to Hollywood if I auditioned for American Idol.