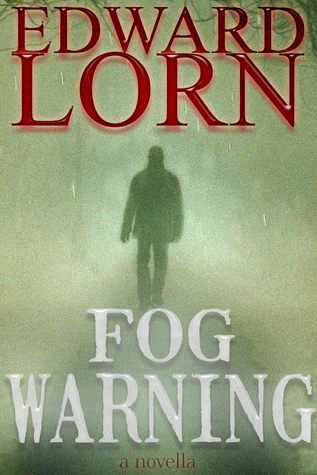 
“The fog comes
on little cat feet.
It sits looking
over harbor and city
on silent haunches
and then moves on.”

Dr. Brent Cummings has had some . . . . ummmmmmm, problems in the past. Problems he moved thousands of miles away from in order to escape. But those problems pale in comparison to the new problem he’s faced with . . .

Yep, the good ol’ Doc just so happened to stumble across a murdered woman in a local park. Or did he?????? Is the fog that surrounds Brent an indicator of ghosts (both past and present)?

Or is it simply a side effect of the nearly constant drug-induced state in which he lives???

I’ve had a bit of a struggle trying to get a review puked out of my brain on this one. You see, no matter what I say I’m going to be doing Fog Warning a disservice. Per a discussion I had here on Goodreads recently – my definition of horror is seriously not the same as everyone else. I didn’t consider Fog Warning to be a horror at all – it was more like a super creepy mystery with a lot of f*&^aroo mixed in for good measure. Kind of like The Sixth Sense - you know back in the days when we all thought M. Night Shyamalan was best thing since sliced bread and not a one trick pony? The main difference between Fog Warning and The Sixth Sense??? I had no freaking clue what was going to happen next in Fog Warning. I also didn’t expect to find myself chuckling on more than one occasion at a potentially crazy and definitely drug addled MC. But I did. Lorn proves once again that he doesn’t need many pages to create deep characters. Characters who should be soooooo unlikeable, but somehow aren’t. This is the third Edward Lorn story I’ve read and I think I can officially say I’m a fan.

Because there is always a chance it will come up. Yes, I’m kinda friendly with Edward Lorn. No, he didn’t give me a free copy of his book (the bastard). I paid for it with my own hard-earned nickels and dimes.
Posted by Kelly (and the Book Boar) at 2:30 PM