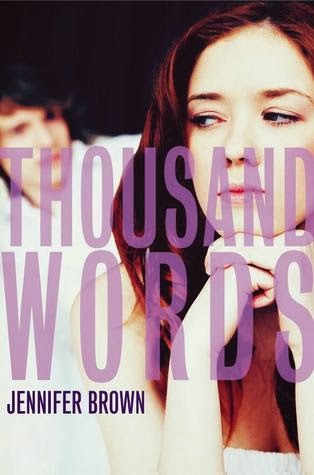 3 Stars
Like a lot of people, Ashleigh made a dumb mistake. Feeling saucy while a bit tipsy, she decides to take a nudey pic of herself and send it to her boyfriend to remind him what he will be missing while away at college. She never guessed that they would break up or what a nightmare she would find herself a part of when her ex forwards the text to someone else. Now everyone (and I mean EVERYONE) has seen the text, Ashleigh a complete social pariah at school, and the police/court have decided to use her as an example of the repercussions of sexting – forcing her to spend all of her free time in community service with some real thugs (or are they?).
I feel bad about giving this a "meh" rating because I LOOOOOOVE Jennifer Brown. Talk about a cool author who interacts with her fans. Unfortunately, though, I can’t give extra stars just because I’m a fangirl. Don’t get me wrong, this book is perfectly okay (hence the 3 Stars). The problem? It’s not The Hate List. If you have not yet read anything by Jennifer Brown, I beg you to pleeeeeeeeaaaaaase save The Hate List for last. It’s knockyoursocksoff good and a prime example of why an old bag like me still wants to read YA books. Thousand Words isn’t a bad book at all – it just really pales in comparison. It reads a little younger (especially given the subject matter), it’s a bit more contrived, it’s just not on the same level : (