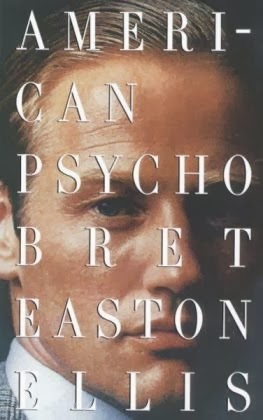 If you were like me and it was through film, how quickly did you fall in love with this?

But you still kinda loved him anyway. Maybe while questioning “just what kind of sick freakin’ freak am I????”

Like everything else, Patrick Bateman eventually faded from your memory. Seven years later something even more horrifying was created – that something was called the “Kardashian”. You were introduced to this fella ...

And waited with bated breath for him to go American Psycho on this new abomination. Sadly, that never happened. Once again, thoughts of Patrick Bateman became few and far between.

Then you began hearing murmurs of an American Psycho musical. DELIGHTFUL! Until the cast was announced. Patrick Bateman played by?????

The beloved Doctor? You immediately stopped procrastinating and put the book on the top of the “to read” pile.

And here we are. Easily the most disturbing book I’ve ever read, but somehow impossible to put down. I continually questioned Bret Easton Ellis’ own sanity – not for writing about Patrick and the things he likes to do in his spare time, but for writing about food, clothing, music, etc. in such a meticulous manner. Anyone who can devote so much time and effort into a running commentary on Brooks Brothers attire from the 1980s cannot be all there. Like most books (Forrest Gump being the glaring exception) – it was soooooo much better than the movie. Deliciously twisted to the point that I ran to check out some other blasts from the past written by the author. Good thing I have a buddy to read them with . . .