The Charm School by Nelson DeMille 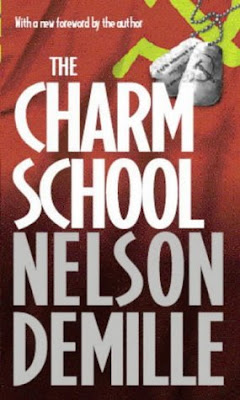 When American tourist Gregory Fisher ventures off-track while driving to Moscow in communist Russia, he gets more than he bargains for.  Near the battlefield of Borodino there sits a Charm School where young Russians are being taught how to be perfect American citizens (by American POWs from the Vietnam War, no less).  The goal is to create an entirely new type of spy.  Will the CIA be able to stop it?

I feel kind of like an a-hole for not giving this one a higher rating.  I've been dragging it around all week and have been told by numerous people how much they just LOVED it and should read it again.  For all intents and purposes this was a good book.  I just thought it would make a better movie.  The dialogue is fast-paced (DeMille has a fabulous dry wit) and the action scenes are very intense.  There just seemed to be a lot of lag time (note to writers - books don't have to be 1,000,000 pages to get the point across).  I found myself hanging on every word thinking what seemed to be the most inane scenes were sure to come back later as "A-HA" moments, but that didn't happen.  The bad guys were bad and the good guys were (questionably) good.  No double-agentry or switcheroos like I kept hoping for.
Posted by Kelly (and the Book Boar) at 11:21 AM