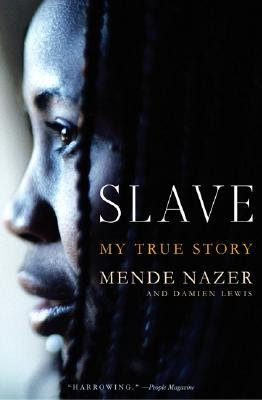 Mende is 12 years old when her Sudanese village is raided.  They rush through on horseback, setting fire to the huts, slaughtering adults and kidnapping the children.  From there the girls are taken individually by the Arabs on a horrific journey where they are repeatedly raped until they reach the capital city.  In Khartoum they will each be sold as slaves and are told by their new owners that is where they will stay until they die.

First, I feel like a real shit for only giving this 3.5 stars.  In my defense, it's because there wasn't ENOUGH book for me.  Mende tells of at least 7+ years kept as a slave in about 150 pages.  I didn't necessarily need graphic details, but I did want to get to know her more, see her strength, know how she developed her survival instincts, etc.  Unfortunately the most horrific scene contained in this novel (other than the village raid and kidnapping) is the mutilation she endured during her female circumcision.
Posted by Kelly (and the Book Boar) at 10:20 AM