The Moors by Jen Silverman 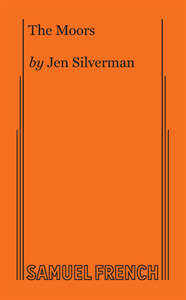 What do an estate house, a dysfunctional family, a dog searching for more, a catfishing expedition, murder plotting, and a musical number inspired by . . . .

Have in common? Well, that’s all things you’ll find in Jen Silverman’s brilliant play The Moors.

As I said before, the play itself was simply brilliant. Dark humor at its best. The cast of only six (along with us attending a performance held in a 40-seat theater) . . . .

(No joke - smaller than a two-car garage.)

Left zero room for error. These students were amazing and turned an evening I’m honest enough to be admit we were pretty much dreading into one we won’t forget. Highly recommend to theater fans who like their comedy with a bit of a murdery edge to it.
Posted by Kelly (and the Book Boar) at 7:00 PM