Life in the fast lane – surely make you lose your mind

Wellllllllllllllllllllll well well. Doesn’t this one just put me in quite the pickle. Theoretically it should automatically receive 1 Star due to the fact that it’s a blatant rip-off of another (nearly brand) new release. From the story to the interview-style delivery, Fast Lane is 100% Kristen Ashleyl’s version of Daisy Jones and the Six . . . . but I liked this one better. And I know that sucks, but my ratings are due to my enjoyment level and this was more my jam. Literally. TJR had the idea, but Ashley had the execution . . . .

American Girl, by Petty. Heroes, by Bowie. Me and Bobby McGee, Joplin, but Kristofferson wrote it, and listen to all the versions, including Gordon Lightfoot’s. Because the Night, Springsteen and Smith. Fire and Rain, by Taylor. Bloody Mother Fucking Asshole by Wainwright. Gold Dust Women. Into the Mystic. Living in the City. Walk on the Wild Side. What’s Going On.

I promise you, what you get out of those songs will not be what you got out of them after you have more life under your belt.

It also helps that the majority of Reid’s fanbase is probably too young to remember “Behind the Music” so they didn’t realize that her “fresh” idea was simply a rip-off too. The one thing I can’t knock? That full-cast audio. The narration of Daisy Jones deserves 5 Stars.

Anyway, back to this one. I could have lived without the graphic sex descriptions this go ‘round. (I mean, I have read plenty of KA and I know it’s her calling card, but seriously you’re getting interviewed for a book and you’re talking about his big cock and how he used to alpha speak you into an orgasm? You stay classy, San Diego). And it also wouldn’t be Kristen Ashley without it being a bit too long in the tooth for its own good (even though this one actually isn’t 600 pages, it still drags on a tad) – but again EXPECTED. The main difference between Fast Lane and Daisy Jones for me? The feeling. Ashley is either a true fan of music or a very good researcher. These characters seemed legit and not just cardboard cutouts of what “famous musicians” are supposed to be. Just enough backstory/development was given to get me interested, but not bog things down – after all, at the end of the day this is a romance book and not a Pulitzer candidate . In addition, Ashley is an author who writes for a crowd that is around my age and this was no exception. The above quote is just a drop in the bucket with regard to references made when it came to namedropping bands, cover songs played and the reasons why. Every single mention was familiar to me and it boosted my enjoyment level tremendously. There’s nothing quite like the power of a song . . . .

Out there in the spotlight
you're a million miles away
Every ounce of energy
you try to give away
As the sweat pours out your body
like the music that you play
Later in the evening
as you lie awake in bed
With the echoes from the amplifiers
ringin' in your head
You smoke the day's last cigarette,
rememberin' what she said
Here I am
On the road again
There I am
Up on the stage
Here I go
Playin' star again
There I go
Turn the page 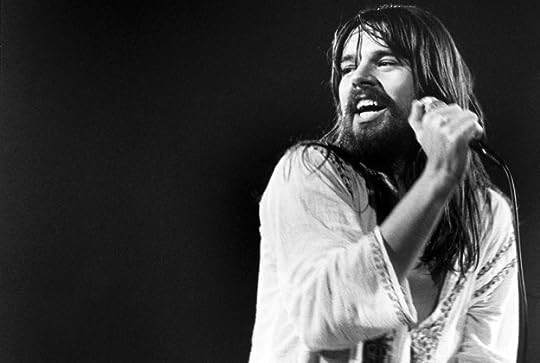 ^^^^ That’s the song (and Bob Seger and the Silver Bullet Band was the band) that immediately came to mind when I started reading this book. Thanks to Ashley, Townshend’s Let My Love Open the Door is my earworm today. That ain’t a bad thing, kids.
﻿
Posted by Kelly (and the Book Boar) at 6:30 PM