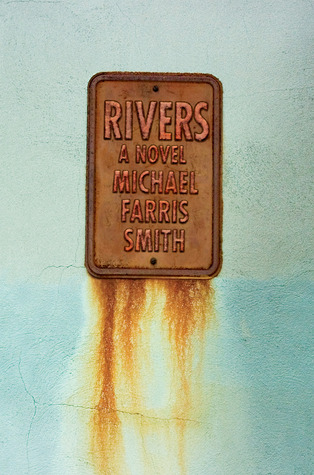 613 days ago the government made a decision regarding things down South . . . .

Hold up. Not that far South. After years upon years of being obliterated by hurricanes, it was decided it was in the best interest of the nation to establish “the Line” – a geographical boundary 90 miles north of the coastline spanning the Texas-Louisiana border all the way across Mississippi to Alabama. Mandatory evacuation was broadcast, the population was informed rebuilding efforts would cease from that point forth, services would be cut, and anyone who decided to stay were informed they were doing so at their own risk.

That’s the basic jumping off point for Rivers - a book Ron has been pushing on me ever since he read it. Actual footage of my reaction to the question “so how did you like it????” . . . . .

Did we read the same book?

#2 – Hints about his dead wife and baby are dropped so frequently at the 27% point my Kindle note said something along these lines . . . .

I have no heart. I know.

#3 – They supposedly live in the new version of the Wild Wild West where no one really even knows if highways still exist to connect them to the rest of America, and yet money remains the driving force . . . . .

Seriously. Any sort of aid/supplies have been cut off for almost TWO YEARS, they all live like marauders and yet money talks and bullshit walks rather than goods and services.

#4 – The premise is that never-ending hurricanes have been completely decimating the South for ages, and yet the stores still contain perfectly clean and usable merchandise. Not to mention anytime something is needed, dude magically comes across it. “Oh noes – I is out of gasoline. Wow! Two full five gallon jugs? Awesome!” . . . . .

#6. I’m not exactly what you’d call a social justice warrior, but this dumbfuck who got rolled by 7 year olds (okay, that’s an exaggeration) earlier is the one who is needed for a bunch of women to break free from the snake-handling preacherman’s cultish imprisonment of them?????

Fuck you. Joel Osteen Homeboy was so old he couldn’t even get it up anymore. Those broads would have whipped some ass.

I mean, it pinged my hinkymeter immediately (per my gripes above) and irritated the crap out of me until the 59% mark where I could confirm my suspicions (those of you who aren’t great at ciphering clues will be waiting until almost 80%).

I also had issues with the instalove by dudebro who was supposedly in the deepest pits of mourning that anyone has ever experienced and also with the pacing and how every near annihilation the characters were confronted with ended up being wrapped up real succinctly with a bright red bow over and over and over again, but there aren't any fun .gifs for those.

Nearly all of my friends liked this one. Hopefully the above will help explain why it sucked turtles for me. This is my second near fail with this author. Maybe it's just not meant to be.
Posted by Kelly (and the Book Boar) at 7:30 PM