Lock Every Door by Riley Sager

WARNING: I AM GOING TO SPOIL THIS STORY. FOR REAL. READ AT YOUR OWN RISK.
Right when Jules finds herself both jobless and homeless (thanks to an unfaithful boyfriend banging some strange in the middle of their apartment), a too good to be true opportunity pretty much falls in her lap – apartment sitting in a luxury building. In order to maintain the appearance of 100% occupancy and prevent any potential shenanigans until new tenants can be found, the co-op board of Manhattan’s Bartholomew pay a hefty sum for people to reside in empty units. Jules hops at the chance for free Central Park living that will net her a profit of $12,000 to start over after her three month stint is over. But what secrets are hiding within the Bartholomew’s walls? And what has happened to the other sitters who came before her?

Okay, so literally yesterday I wrote a review of a book that had a handful of similarities to other books that 100% did not bother me at all. I don’t know if it was the old “imitation is the sincerest form of flattery” mumbo jumbo or that it was fresh enough that they seemed like shout-outs rather than rip-offs or what. It doesn’t really matter. What does matter is . . . . .

In case you haven’t figured it out. I am the people in question here. I am fickle, I am a fuck and so is my “meh” rating.

Let’s start with the good first, though, shall we? To begin with, I read this LAST NIGHT. Like, I got off work, ran by the grocery store, pre-heated the oven to start dinner and opened the book. I was finished by 8:30 and had fed the humans I'm responsible for keeping alive annnnnnd washed the smelliest uniforms in the history of the world. Now, I know I read fairly quickly, but this was legit a fast read. Second, the book's timeline was fast too. Everything took place within a week which helped not only with the page turnability, but also when it came to the big reveal (no matter how RIDICULOUS *trademark Ron 2.0* it might have been). And finally, while I don’t live in NYC, I do work in a “city” and in order to get to the office I turn down this quaint little tree-lined street in the middle of high rises and ewwww that features a coffee shop and a corner restaurant/jazz bar and lofts with a little courtyard/fountain area that I immediately pictured as the building in question here . . . . 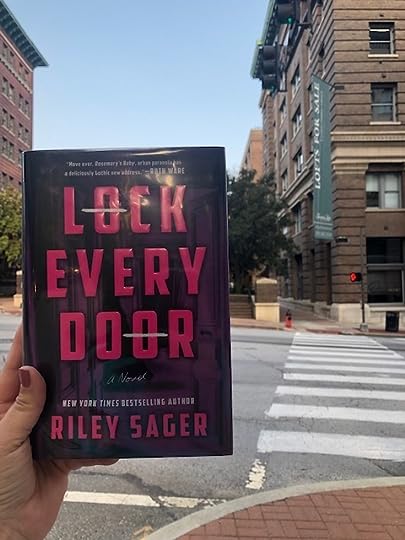 I love being able to put myself in the setting - or at least my flyover country version of it. So what went wrong????

Jules may not have been knocked up, but right away it was pretty apparent Riley Sager must be quite the Ira Levin fan because this baby was pretty much . . . . .

(And I literally just looked at the cover (because I read the Kindle version, but also checked out the hardcover in order to take a lameass book picture for Instagram) and saw Ruth Ware’s blurb comparing the two so it must be even more apparent than I thought.)

Obviously that had to be some sort of red herring, though, because it was waaaaaaaay too easy to sniff out. I will admit that I did not see the twist coming. However, when it did . . . . .

Urban legend????? Oh lort. I’m giving this one 2.5 Stars because I was highly entertained by that ending – just maybe not in the way the author intended me to be. (Rounding down because I could have really lived without the missing sister nonsense that didn’t go anywhere.) Please note I am TOTALLY in the minority here. Most of my friends gave it 4 or 5 Stars. Also note I’ll happily pick up whatever he releases next since they are fast and fun. 2 Stars = “it was okay” and it was absolutely okay for me.
Posted by Kelly (and the Book Boar) at 7:30 PM