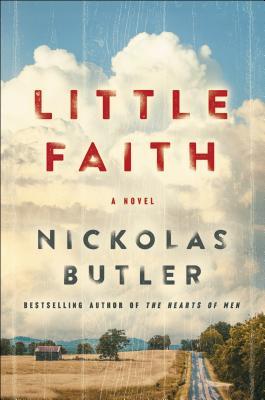 How can it all be random, chance, a beautiful cosmic accident? How?

Here’s a dramatization of what I imagine it would look like if I ever attended a Nickolas Butler meet-n-greet . . . .

Little Faith is only my second experience with this author, but I’m most definitely willing to say damn this fella can write. The story here centers around Lyle and Peg – retirees residing in rural Wisconsin. Their daughter Shiloh has recently returned to the family homestead along with her six-year old son Isaac. She’s also become an active member of a new church . . . .

Holy-Rollers I was maybe prepared for. But it seems our daughter has joined a cult.

Lyle lost his faith years ago when he and Peg’s son was born – only to die within hours. However, he’s always been supportive of Peg’s (and anyone else’s) beliefs when it comes to things of a godly nature. But when Joel Osteen Shiloh’s pastor (and potential future husband) amps up the creep factor by claiming Isaac to be a “healer” Lyle has trouble keeping his opinions to himself - potentially breaking up their newly reunited family.

As you can see, at its heart this is a story about family and faith. It’s probably not for everyone since there’s not a lot of action or bells and whistles, but I found it to be absolutely absorbing. I felt I actually knew these people by the time I was done reading and I was bummed to not get to be part of their lives any longer. I wanted to shake the crap out of Shiloh and her Kool-Aid drinking idiot ways, run “Pastor” Steven over with a truck and become best friends with Hoot. I’m pretty thrilled that there’s not only another Butler novel out there that I’ve not yet read, but also that I discovered an (olllllllllllllllllllllllllllllllllllllld) unread ARC of his short-story collection on the Kindle the other day. I’m officially a fan.
Posted by Kelly (and the Book Boar) at 7:30 PM