In Harm's Way by Doug Stanton 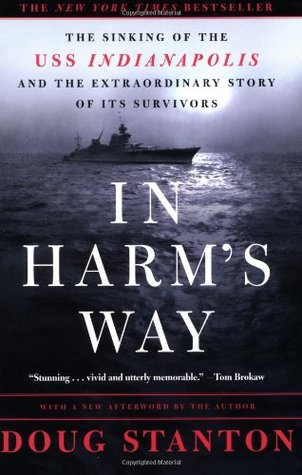 In the early morning of July 30, 1945, the USS Indianapolis (after delivering the makings of what was known as “Little Boy” – the atomic bomb that would eventually be dropped on Hiroshima) was torpedoed by a Japanese submarine. The torpedoes nearly sheared the Indianapolis in half and within 12 minutes the entire ship would vanish to one of the deepest burial grounds in the ocean. Nearly 300 men would die almost immediately – close to 900 would make it off the ship. In Harm’s Way is the true story of what happened in the four days it took for the military to discover the survivors . . . .

This has been on my to-read list for an eternity. In my mind it was always a book that could only be read during Shark Week. As my bad luck and failing brain would have it, I generally put myself on the wait list too late and have simply been putting this off every year when the timing failed. Until this year. As someone who does not read a lot of non-fiction I will say this earns every one of its 5 Stars for being succinct, not bogged down in military lingo and technical mumbo jumbo and presenting a story so horrifyingly fascinating it read like fiction. A must read for every shark addict . . . .