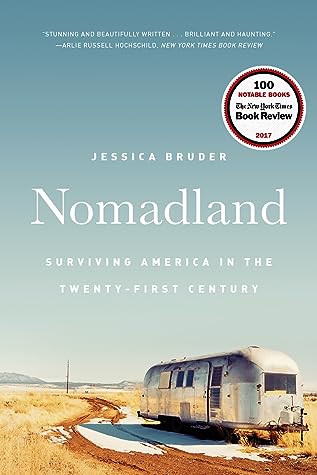 “At one time there was a social contract that if you played by the rules (went to school, got a job, and worked hard) everything would be fine. That’s no longer true today. You can do everything right, just the way society wants you to do it, and still end up broke, alone, and homeless.”
Nomadland is the three year study of a subset of retirees living the above quote. Either due to losing (or never acquiring) a pension, the housing bust, market crash, divorce, or a handful of other unpredictable situations, these folks have chosen a lifestyle similar to “a modern-day version of The Grapes of Wrath.” Their homes????

Their work? Whatever the change in season and change of location brings. From the much advertised . . . .

For the Christmas rush to various harvests in the Fall . . .

To maintaining campgrounds and manning rides at amusement parks throughout North America in the summer . . . .

These are people with an incomparable work ethic who have chosen to do whatever it takes in order to get by. They have swapped $100,000 per year budgets for $75 per week and comfortable homes with sprawling lawns in suburbia for motor homes, modified delivery vehicles and pull-behind campers. Their stories are simply fascinating. Highly recommended to those who have never experienced more than a First World Problem as well as anyone who is looking for non-fiction with the page turnability factor like what was found in Evicted.
Posted by Kelly (and the Book Boar) at 7:00 PM