Last Will by Bryn Greenwood 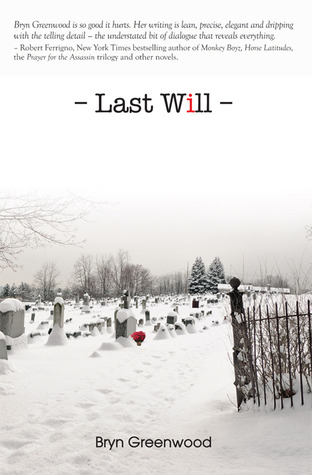 “He doesn’t need therapy. He just needs someone to love him.”
Multigajillionaire Pen Raleigh has died, leaving his company, home and entire fortune in the hands of the last in the line of Raleighs - Bernie. Spoiler Alert: I fell in love with him almost immediately . . . .

“My personal policy toward most of humanity resembles the Army’s policy regarding homosexuals. I won’t ask; please, don’t tell me.”

For whatever reason, my brain cast my favorite Drunk Historian as the lead . . . .

Making me hear Allan McLeod’s voice in my head the entire time I was reading which only increased my level of adoration. I’m now officially declaring Bernie as my book boyfriend and I dare any of you to try and take from me because . . . .

I asked the library to buy a copy of Last Will after falling in love with all things Wavy and Kellen with the release of Greenwood’s All the Ugly and Wonderful Things. I don’t know why it took so long for them to purchase this one, but when they finally did I found myself terrified to read it. I mean lightning doesn’t always strike twice, know what I mean? As the days ticked by, the deadline for this selection to go “poof” off my Kindle approached, and a blizzard that happened to match the cover hit like a sign from above, I figured it was time to finally bite the bullet. What I found was my kind of love story . . . but very much NOT your typical romance. Full of quirky, broken people, this is a story about healing and acceptance and finding yourself and making a family. It won’t be for everyone because there’s not a whole lot of action to propel the story along. You truly have to fall in love with these people or it won’t be for you. A dry sense of humor probably wouldn’t hurt either because Greenwood is pretty hilarious in a very understated way. I was lucky enough to be approached for an advanced copy of this author’s next release – which again had me terrified upon receiving the offer. At this point, though? I think it’s pretty safe to say . . . . .