Recipe for a Perfect Wife by Karma Brown

Every woman needs a good secret or two.

Here’s some blatant honesty for you: The only reason I put my name on the library list for this release was because the cover reminded me of the vintage e-cards that I find hilarious . . . .

Little did I know the story itself could have easily been inspired by those snarky little snaps that I find so amusing.

Aspiring author Alice is a modern day “housewife” (not necessarily by choice, but you’ll find out more about that if you read the book). She and her husband Nate have just moved from the Big Apple to suburban life, bought a fixer upper and are hopeful Alice will soon be barefoot and pregnant . . . . 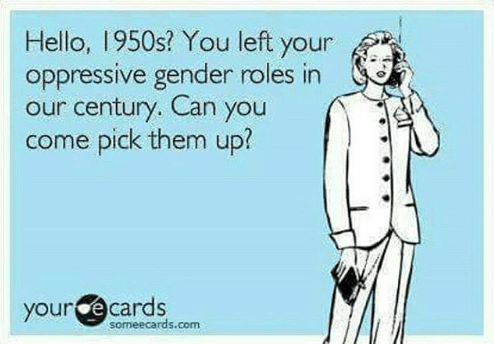 Nellie lived in the same house back in the ‘50s when it was fresh as a daisy with her husband Roger. They were the picture perfect couple . . . . . 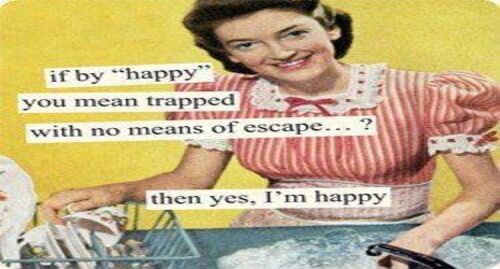 When Alice stumbles upon a box of old magazines, Nellie’s family cookbook and is later gifted a pile of letters from Nellie to her mother that the neighbor has saved for ages, she begins channeling her own inner domestic goddess and finds inspiration for her potential book. But the more she reads, the more she uncovers . . . . . 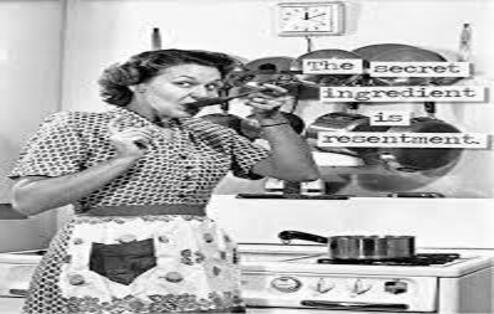 I really didn’t expect this book to suck me in the way it did, but boy howdy did it. From the dual narratives to the “helpful hints” on how to be a good wife rather than some shrieking harpy to the recipes, I just couldn’t stop turning pages. I actually have a recipe box rather than book with notes like the ones in here, had to call my mother-in-law for backup at 5:00 a.m. the first Thanksgiving I cooked on my own because I had no clue what the eff “oleo” was (that was before Google since I am a dinosaur), and 100% have been horrified by the vast amounts of gelatin-based “salads” and “high-end” appetizers my Grandmother chose to pass down just like some contained in this book . . .

“It’s called ‘Hollywood Dunk.’ An appetizer from the fifties.”

“Deviled ham. Chives. Onion. Horseradish. It’s chopped up deli ham mixed with mayonnaise, mustard, hot pepper sauce, and salt and pepper, and then you blend it a bit. Then you add the chives, onion, and horseradish. Oh, and the last thing is whipped cream. Can’t forget that.”

“Why would you make this? To eat?”

(In case you want to make this sure-to-be-delicious concoction for your next Bunco gathering, you serve it with a big ol’ bowl of chips.)

I definitely don't think this will be a winner for everyone, but I was completely enthralled by the whole dang thing and I’m giving it all the Stars.
Posted by Kelly (and the Book Boar) at 9:25 AM