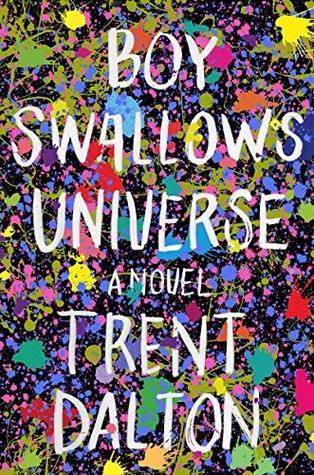 Boy Swallows Universe was already on my TBR for receiving a bunch of accolades when it came out from various sources which I can’t remember because my brain is made of Swiss cheese. And more importantly because I thought it was a Young Adult novel (Apparently it isn’t??? I still argue it is) that was written by an Australian and I’ve had pretty good luck with the Aussie YA novelists in the past. Then a friend of a friend recommended it so I went ahead and pushed it to the top of the heap in order to play the guinea pig since I’m the faster reader. Hindsight being 20/20, I should have made her read it first. It was her pal who said how great it was, after all.

In theory this book should have been a clear winner for me. It had so many things that usually generate a high rating . . . .

So what went wrong?

Okay, that’s a lie. I read every dang page. But that’s really my biggest complaint. Reading this was like driving on a highway full of potholes. Things were moving along just fine and I found myself getting to know the characters and invested in the goings on and then WHAM – the pacing just went right out the window while the author droned on and on and on about crap that didn’t have anything to do with the story (*rinse - repeat* ad nauseum). I also don’t really buy that much of this was inspired by any real life events and when it came to some magical realism being thrown in as an afterthought I was like . . . .

But still it wasn’t terrible so 3 Stars.
Posted by Kelly (and the Book Boar) at 7:30 PM