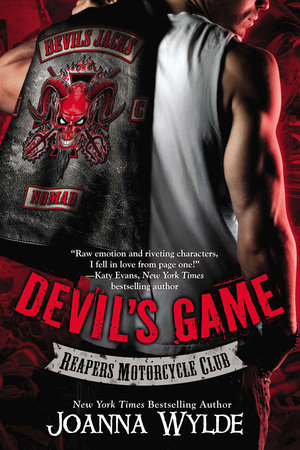 The only reason I’m not giving this 5 Stars is because I (unfairly) compare every motorcycle book to Hades Hangmen and Motorcycle Man. Don’t let the missing star fool ya, though, ‘cause as soon as I met Liam?????

Number eleventy-seven in my motorbike porn readings, Devil’s Game had a wee different spin on things. The first clue this one was maybe not going to be exactly like the others was the title. While everything else in the series has been Reaper’s This and Reaper’s That, Devil’s Game lets you know immediately that it is, in fact, the “one of these things that is not like the others.” The style wasn’t quite the same (the author flat out says she wrote more of a New Adult vibe rather than straight-up erotica intentionally) and the “Reaper” is lacking in the title since the leading male is not one. Nope, our boy this go ‘round was a real Devil. Devil Jack, that is.

A bigly chunk of the story also covers the same timeline as Reaper’s Legacy when Em and Sophie were kidnapped by the Liam and the Jacks. I’m not sure how many people that will annoy, but I figured it’s worth mentioning. It probably just depends on how much you want to bang Liam. And trust me when I say I want to do allllllll the bang with Liam . . . .

So without spoiling things as per above, the leading lady Em (club President Picnic’s daughter for any other weirdos who like to know all the deets) and Liam have an unusual meet-cute and a real . . . .

That results in quite the enjoyable relationship between the two . . . .

“I’m gonna buy a bright red dress to wear to your funeral, Liam.”

“Yeah? Make sure it’s short and shows off your tits.”

That continued to be amusing throughout pretty much the entire story . . . .

“Don’t shoot me by accident, please.”

“I promise. I will never shoot you by accident.”

“Love is a word that doesn’t mean a damned thing to me. Em, though? That’s a word that means everything. I’d die for you babe. Kill for you, too.”

It was a breath of fresh air to have a female lead who kicked ass and didn’t take any shit and the NA spin kept things interesting when it came to the zoom zoom parts. There’s little to no chance at this point I’ll be able to avoid Wylde’s other series about the Silver Bastards. She’s got me in her web.
Posted by Kelly (and the Book Boar) at 7:00 PM