The Valley of Amazement by Amy Tan 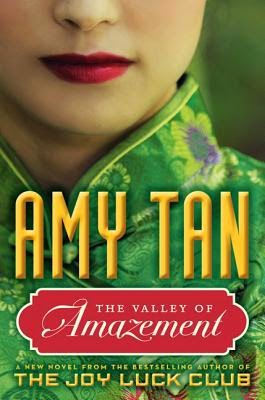 An epic mother/daughter saga that spans 50 years. The Valley of Amazement tells the story of Lucia, who became pregnant as a teen and left her family in hopes of marrying her Chinese lover. When he refuses to go against his family’s wishes, Lucia must survive on her own – eventually opening a courtesan house that caters to both East and West. The story continues with Lucia’s daughter, Violet, unrecognized by her father’s family she becomes a virgin courtesan at 12, but constantly hopes to find love, marriage and happiness. The tale ends with Violet’s daughter, Flora, who may be the only person who can bring these wounded women back together.

I’m fairly certain I had an “it’s not you, it’s me” moment with this book. After reading several works by Amy Tan, I am ready to admit, I just don’t like her writing.

The Valley of Amazement, like all of Amy Tan’s books, can be summarized quite simply:

The difference between this and her other books? Instead of this book reminding me of Tan’s other works, it reminded me of something else

That something is called Memoirs of a Geisha. Now I read Geisha about 150 years ago, so it’s probably not nearly as good as I believed it to be at the time, but I have a feeling I'd still find it to be better than this one. Good lord with the so many pages and words and never ending misery and need for editing. Add to that a host of characters that I absolutely COULD. NOT. STAND. and once again I feel let down by Amy Tan.

I will own up to the fact that I am not a book-clubby-book kind of gal and millions of others will find this to be Tan’s greatest masterpiece. To that I say more power to you. It was just not my cup of tea.
Posted by Kelly (and the Book Boar) at 9:47 AM