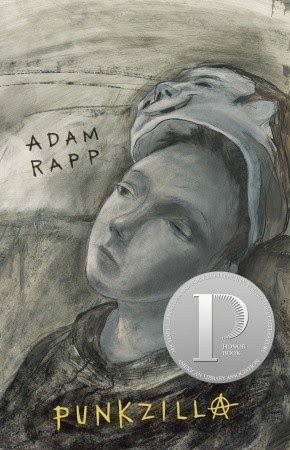 3.5 Stars
Jamie (a/k/a “Punkzilla”) has been on the run. Running from his past, running from his father, “the Major”, running from the boarding school he was sent to in Missouri. After being contacted by his dying brother, Punkzilla makes the decision to stop running and head to Memphis and see his brother before it’s too late.

What did I think of Punkzilla? Hmmmmmmmmmm . . .

Screw it – I’m writing this before my brain gets a chance to work against me even more. The truth is, I’m not really sure what I think about it. Punkzilla was added to my TBR pile during my quest to find books that would make me get all feely. The library guaranteed it would bring the tears.

No, seriously, I’m not crying. That’s not to say it wasn’t good. Hell, it won the Printz Award so it’s probably great, right? It was just so different that I don’t really know what to say. I like when an author is brave enough to take a different approach to telling his tale, so choosing to write this novel as a series of correspondence was great. Many times I find myself wanting to strangle YA leads, but that was not the case here. Jamie was endearing and had a great voice. I like reading YA that pushes the boundaries and is really not for kids (seriously - this has some very mature content). But . . . . . there was just something missing (mainly MORE of the story), so

Again, my apologies for such a blasé review. Here is a .gif of a baby monkey taking a bath in order hopefully keep you reading here : )