Uganda Be Kidding Me by Chelsea Handler 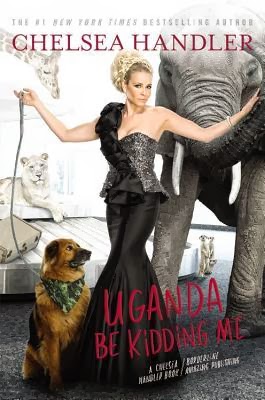 If it weren’t for the fact that seeing her on television or hearing her voice makes me want to stab her in the face, Chelsea Handler would probably be at the top of my fave celebrities list. Luckily she writes books so I can just picture Elizabeth Banks’ in my head as the leading lady while reading all of Chelsea’s stories. Seriously, it works. They totally have that “separated at birth” thing going for them . . .

Once again, Chelsea’s book brought the funny that her television show just doesn’t seem to be able to do for me. Her tales of various travels told in her signature self-deprecating style with 100% ownage of the fact that she is a complete imbecile gave me multiple LOLs.

While the book is about Chelsea’s various vacays, for me (someone with the mentality of a 12-year old) the true guffaws came from her stories of public urination and one gutbuster about crapping her drawers.

The only problems I had were the signature “Uganda” story made up for about half of the book by itself and then the tales turned back to the normal essay style I’m used to while reading books by comedians. I also had a problem with the feeling of déjà vu I was left with at the end of the book – the realization that I’m more than likely a huge jerk for my unjustified rage whenever I see Chelsea on my T.V. screen and the feeling that she is probably the nicest asshole one could ever meet. After all, she was kind enough to leave me with the warning to never forget that “dolphin rape is a very real thing” that I’m now passing on to all of you.