The Ruins by Scott Smith 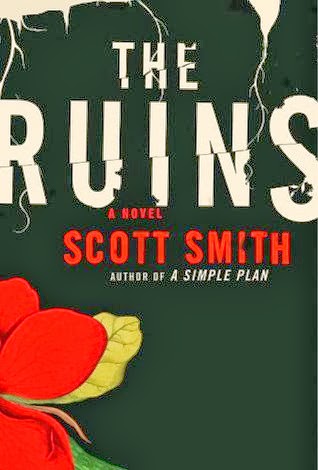 4 Stars
You know that old saying “timing is everything”? I have a feeling this book would have received a 5-Star rating from me rather than 4 had I not ran across a little ARC called The Troop several months ago. Upon my reading (and ranting and raving and begging every horror lover and their dog to read said ARC), a plethora of my GR friends started recommending The Ruins to me. Since I’m an idiot, I immediately forgot about it. Months later, the title popped back on my radar and I made myself check it out from the library within the hour so my brain couldn’t get a chance to fail me yet again.


Having now read both, one scene contained in The Troop was clearly, let’s say, “inspired” by a very similar scene from The Ruins. Had I read The Ruins first, The Troop may have received a demerit or two from me for borrowing something so memorable. However, The Troop was simply overflowing with chapter after chapter of new levels of mindbuggery so I maintain it is the better book.

Alright, enough of that – on to the review. The Ruins isn’t your typical horror novel featuring a super scary bad guy.

in the span of only a few hundred pages - and while there was plenty of gross-out factor, the true terror came from what was going on inside the characters’ heads.

An honest to goodness horror novel that will make you gag, scare the pants off of you and leave you torn between thinking you will absolutely not be putting it down until you’ve turned the last page to the polar opposite of throwing it across the room and screaming for a bit before returning.

One thing is certain, after you read The Ruins, you will most definitely rethink ever venturing away from the resort if you are on a Cancun retreat in order to see how the Mayans lived . . .

(and if you really want to induce vomiting, venture on out to Tumblr and look at the other gifs that I was kind enough not to share here)