Where We Come From by Oscar Cásares 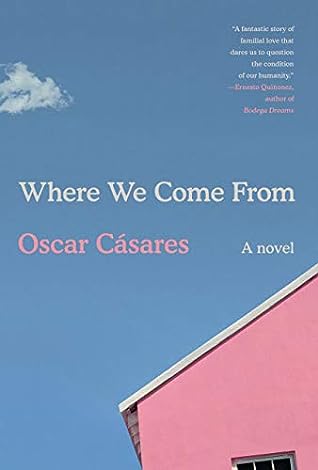 As I mentioned last week, after all the big hullabaloo over the past month the go-to article appears to be this 17 Great Books on the Border to Read Instead of ‘American Dirt’. No one else seems to have a problem that said article was written by one of the whitest white women I’ve ever seen, yet somehow I can’t stop singing . . . .

But I digress. I don’t like the “don’t you dare” approach to reading, whether it’s American Dirt or anything else, so I wish this article would have been entitled “17 Great Books on the Border to Read IN ADDITION to American Dirt.” Voracious readers aren’t stupid. We’re more than capable of reading more than one narrative and/or author regarding similar topics and I certainly felt I should put my money (or library card, as the case was here) where my mouth is and pick up a few of these books and see if they offered more than the cause of the kerfuffle.

Where We Come From is the story of 12-year old Orly and three weeks he spends with his godmother Nina during the summer in Brownsville, Texas. I thought this book was excellent up to around the halfway point. The story about how Nina agreed to do a favor for her housekeeper which then ended up turning her mother’s guest house into a safe house for coyotes to use was page-turning. And the snippets regarding various ancillary characters’ personal/family immigration stories was some of the best storytelling I’ve come across recently. Buuuuuuuuut if you want to talk about farfetched and a book that totally took a nosedive, everything after Orly met Daniel (a boy who had been with a group of migrants in the back house, then managed to find his way back through the city of Brownsville to the safety of Nina – despite never being there before and never being allowed to see even the light of day, much less the surrounding neighborhood/street signs/etc. of said house – when Border Patrol pulled over their vehicle who knows how many miles away, and yet somehow couldn’t remember his father’s phone number in order to contact him) cued a massive never-ending eye roll for me. Not to mention all of the stupid decisions Nina made with respect to the care of either of these children.