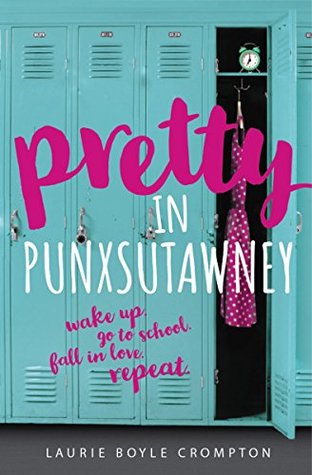 If the Super Bowl confirmed one thing, it’s that Bill Murray is truly a national treasure. Twenty-seven years later and this commercial was everything . . . .

It’s no wonder I immediately had to snag this from the library as soon as I heard about it late last year. As the title suggests, Pretty in Punxsatawney is a mash-up of . . . .

The leading lady is even named Andie and she gets mad props for pointing out the one glaring fault of Pretty in Pink . . . .

I realize Andie made this prom outfit all by herself, and she was combining two very different styles, but the dress Iona gave her looked sort of cool on its own. This thing looks like it was sewn together by an ape.

The premise here is that Andie finds herself on a loop repeating the same day over and over again during her Senior year in high school. She believes she won’t be able to move on until she experiences “true love’s first kiss” but along the way she also finds herself helping her fellow students blur the lines of her oh-so-very-John-Hughes-movie-sorts-of-stereotype-high-school.

I’m obviously not the target demographic for this one, so I’m going to stick to a middle-of-the-road type of rating and round up to a three. As a mom I absolutely hated Andie’s mother and would like to give her negative eleventy trillion stars and I also didn’t like the idea that Andie started each day by attempting to be someone new. Young girls don’t need more of that message – just stay true to who you are and eventually you’ll find your people. And now I’ll excuse myself so you can all say what needs to be said behind my back – things like . . . .