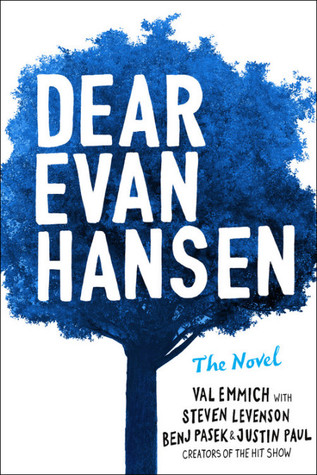 Boy, this is a tough one. If you’re not familiar, Dear Evan Hansen is actually a story originally presented as . . . . .

And it is good. SO. GOOD. Like give them all the Tony Awards good. And the touring company is coming here soon and I’m sooooooo hoping tickets will be available so me and my fellow songlover kid can attend. But my reaction to the book?????

Here’s the pickle I’m in. This was so much more than a novelization. It was full length and well written to boot. The problem? Evan is kind of an awful unlikeable character for a goodly chunk (like 90% of the thing) until the reader/audience really gets to know what makes him HIM and you can become sympathetic to him making this just a cringey type of read. And the character who IS automatically the one you want to get to know more? Well, unfortunately he’s dead . . . .

So the chapters from his perspective are few and far between.

Obviously other things were missing in the print version as well. Like . . . .

That boy is just farking adorable.

I’m always looking for stuff to listen to during the commute, but since I only spend about 20 minutes in the car each way I’m pretty particular about what I want. Funny, short, or something I’m already familiar with in some way are generally winners. Probably goes without saying the narrator needs to not suck (narrator definitely does not suck here). If you’re a lover of YA you won’t be wasting your time here – same goes for if you’re a crazy completionist superfan (trust me, no judgment). As for me? My family is just happy I’ve changed up the playlist I sing while I’m dusting, vacuuming, washing dishes, doing laundry, taking a shower awake . . . .