One For The Money by Janet Evanovich 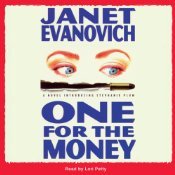 Actually, that’s a boldface lie. I obviously have no desire to ever give up on our one-sided relationship. I mean, I’ve faithfully read about Stephanie Plum, her exploding cars, her gun-toting Granny, her former ho bestie, and her will she-won’t she relationships for over 10 years now. Not to mention all of her other series I’ve dabbled in, as well as some of her romance books, and dare I forget the pretty godawful movie version of this one that I just haaaaaad to watch . . . .

When I saw my friend Beverly was giving this a listen, I thought it might be right up my alley. Since my commute isn’t very long, I prefer shortie shorts that don’t require me to remember a lot of details in order to stay involved in the story. My mind tends to wander when dealing with the spoken rather than written word. You know what I mean . . . .

Twenty-plus books into this series, I forgot how solid this first one was. The slapstick level had not yet appeared, nor had the never-ending love triangle. Lula was still an actual ho and Stephanie had to contend with a pretty rough bad guy instead of the flashers of her future. But the most important thing? Lori Petty’s narration . . . . .

Holy crap she was good. Which means I’ll probably end up falling down this dang rabbit hole and re-experiencing these all over again . . . .