Seriously folks, this is the one time where there was a 100% spot-on comparison and it’s pretty much the only reason Meddling Kids even pinged my radar. 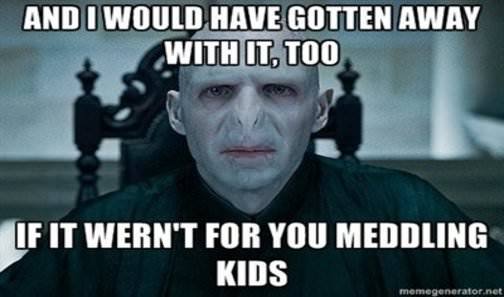 But in the present, that little niggling feeling that everything wasn’t on the up-and-up remains . . . .

“What about the house? The pentacle? The empty coffins? The symbols written in blood?!”

You know what happens next right????

“We’re putting the band back together.”

The end result ended up being a mixed bag. There’s zero chance I’m not giving this a fairly high rating simply for the nostalgia factor. I don’t really give a rip that many of the plot points were knocked-off of “Spooky Island” from the live action film. However, I can’t round up due to the vastly different reactions I had to the writing. Like how can this overwritten nonsense . . . .

She was joyfully drowning in Kerri’s hair, its fragrance and softness pounding on her senses like a cheerful Mongol army banging on the gates of Baghdad.

Possibly be from the same person with such an easy humor???

“So this is a witch’s house?” she said. She checked the spiraling ornaments of the porch lamps and the handrail, the silent wooden wind chime, the withered Christmas wreath on the door. “Looks like the place of an old lady who never got married.”

“That’s Puritan for ‘witch,’ ” Nate said, and he knocked again.

Not to mention the weird formatting where dialogue somehow goes from novel format to script format . . .

Or the ridiculous word inventions spattered throughout like “tragichuckled” or “deminodded” as well as all of the mentioning of Kerri’s hair having a personality of its own and the fact that it should have probably been more like a novella size because it seemed to drag on and on. All of that stuff made me want to take off my glasses. And you know what the result of that is . . . .

I'm sticking with 3.5 Stars for the wayback feelz, but I hope the author recognizes this is a one-hit wonder and should definitely not be the beginning of a “A Blyton Summer Detective Club Adventure” series.
Posted by Kelly (and the Book Boar) at 7:00 PM