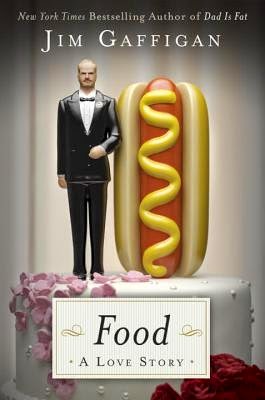 4 Stars
As a person who enjoys Jim Gaffigan’s stand-up routine, I jumped at the chance to read Dad is Fat. Unfortunately, since I’m raising my own brood of horrible offspring that one fell just a tad flat for me. However, as a fellow chubbo I was all grabby-hands when it came to getting a copy of Food: A Love Story . . . Wait, you know what this review could use? A DONUT!

Where was I? Oh yes, being a fatty. Like Gaffigan, I too have been accused of “eating my feelings” a time or twelve – and my response is the same as Jim’s: “Yeah, but these feelings are DELICIOUS.” There are no endorphins released from eating tofu . . . but a giant plate of Chili Mac from Steak ‘N Shake can bring-a-da-happy.

(While we’re talking about Chili Mac let me take an aside to address the good folks at Pinterest. STOP trying to say you have a recipe for this concoction. You don’t. As someone who lived in a town without a Steak ‘N Shake for years I can tell you I’ve attempted to recreate this magic again and again. It simply can’t be done.)

As the title states, this is Jim Gaffigan’s ode to food. It’s about the foods he loves, the foods he hates, and of course – Hot Pockets.

While I’m not sure I’d recommend reading it from start to finish without taking a breather (like I did), I can say every chapter made me smile and several drew some big hardy-har-hars. Gaffigan is funny and once I saw he claimed “Oklahoma Joe’s” to be Kansas City’s #1 BBQ spot, I was a firm believer that he really knows his shit when it comes to porking out.

(That’s Oklahoma Joe’s. Yep, it’s a gas station . . . that also happens to sell the best barbecue in a city KNOWN for barbecue joints.)

If you’re contemplating when you’re going to go grab a kale burger, this is probably not the book for you . . . but if you like to laugh almost as much as you like to eat then you should definitely check it out.

I’ll begin with my hometown of Galesburg, Illinois. If you ever find yourself stuck in flyover country, you probably won’t be surprised to know that the corn-fed members of the U.S. population eat pretty tasty stuff in order to maintain their physiques ; )

No trip to Galesburg should EVER happen without a stop at Dixon’s Coney Island. They’ve been in business since Jesus was a toddler and serve up the most delicious greasy coney dog you’ll ever shove in your face. This sounds grotesque, but order at least 4 (preferably 6). It’ll just save you a walk-of-shame back up to the counter begging for more.

Happy Joe’s now spans a few states in the Midwest rather than just Illinois and their taco pizza is something that’s been raved about for years, but I’m telling you to skip the taco pizza and get the BLT instead. Yes, mayo on a pizza. No additional charge for the heart attack.

Sometimes you don’t mess with perfection. The best cake in the universe comes from no other place than Costco. It only costs like $15 and it is to die for.

(Literally. If you eat more than one piece there’s a 98% chance you’ll get diabetes.)

If you want to eat a sea scorpion, just order it from Legal Seafood. It comes covered in seaweed and is alive and kicking until you put it in the pot of death.

(“Can you hear the lobsters screaming, Clarice????”)

Same goes for donuts. The best donuts, hands down, are made at Voodoo Donuts in Portland. Pay the billion dollars and have a box shipped to you. It’s worth it. Make sure you order a maple bacon.

However, if you are in Kansas City and want to experience something other than the deliciousness that is Dunkin’, you should seek out the Donut King. Not only do they have every type of donut your heart desires, they cook them fresh 24 hours a day.

You’re probably asking yourself, “why is this dumb broad including a picture of her house?” Well, smartypants, it’s not my house. This is a pretty well-known establishment called Stroud’s. It’s been featured on about every “eating across America” type of program on the Food Channel and for good reason. Dinner is served family style, with heaping bowls of green beans, potatoes and gravy and, of course, chicken. I don’t eat meat with bones in it (that’s what she said, *rimshot*), so I always opt for the chicken fried steak. Trust me when I say it’s worth the clogged arties.

While you’re there, you can also get a super appropriate T-shirt to wear to your next parent/teacher conference:

Last but not least, if you’re ever in KC you should take a stroll down 39th Street. This is where the hipsters live, but don’t let that detract from your enjoyment. Regular weirdos like me have lived there too. The best place to eat is Fric & Frac. If you’re lucky, the wicked hot bartender will be working, but even if he’s not the food is killer. What do I recommend?