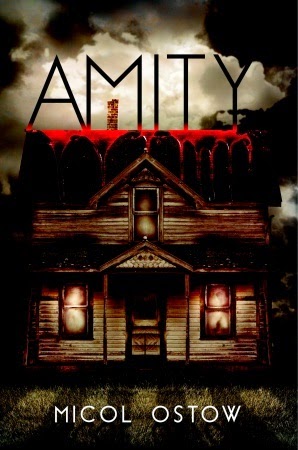 
Is there anyone left on the planet who hasn’t heard of the Amityville Horror????? I didn’t think so.

This story was inspired by the events at Amity, but is not a retelling of the original story. The classic tale of horror and gore is toned down quite significantly – leaving only references to the original (i.e, 3:15 a.m., the “Red Room”, the boathouse, etc.). This new retelling focuses on the potential insanity that began to take hold to two different families during two different generations.

The two star rating on this novel come from the following blurb:

For fans of Stephen King and American Horror Story, a gruesome thriller suggested by the events of the Amityville Horror.

To begin with, EVERYONE should know better than to throw the Master of Horror’s name around unless they are real dang certain they are writing some deep and scary shiz. And offering “American Horror Story” as the next comparison???? That show makes me sleep with the lights on . . . and I’m olllllllllllllllllld. This book does not even come close to the terror that King and/or Ryan Murphy and Brad Falchuk’s creepy creations can generate.


That being said, this is a YA horror novel and, I believe, will definitely hold its own when it comes to that genre. The simple blurb “a gruesome thriller suggested by the events of the Amityville Horror” is quite sufficient. My rating probably would have jumped to 3 Stars if not for the overhype. Reading the potential mental collapse of two of Amity’s residents actually made for quite the page-turner and I wasn’t disappointed at all to see the level of gore reduced. At the end of the day, the only thing I was really missing???? Ryan Reynolds’ abdominals ; )