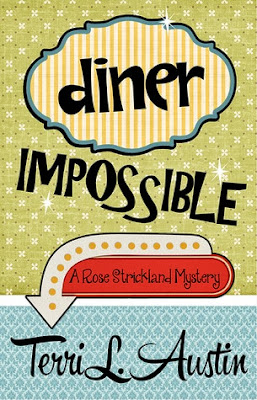 Rose Strickland was born with a silver spoon in her mouth, but after dealing with her parents’ constant disapproval of everything in her life she decided to pull it out. She now lives by her own rules – working as a waitress in a little diner part time, going to school part time and solving a few crimes part time????

The new case that has everyone fired up is the murder of the corrupt police chief’s secretary/mistress. While outside appearances have most fingers pointing to the chief being guilty, straight-laced police officer Andre Thomas (a/k/a "Officer Hardass") believes the chief may be dirty, but he’s not stupid enough to murder someone. Thomas decides to enlist Rose’s help, on the sly of course, and find the answers. Add in Rose’s high maintenance mother butting in to the case in attempt to save the chief’s wife’s reputation at the local Junior League, an additional mystery of a missing collectible Star Trek uniform that Rose’s pal, Ax, needs tracked down, and a budding romance with local criminal Sullivan to fill Rose’s plate.

If you’re like me, you have already read Stephanie Plum, and Sofie Metropolis, and Heather Wells, and Sookie Stackhouse, and on and on and on (Note: Kinsey Millhone is still on the backburner because there are like ELEVENTY BILLION BOOKS IN THAT SERIES) and yet you still are satisfied and sometimes want another series that is just fluffy and fun. That’s where I found myself while browsing through possible ARCs. I had not read the first two books in this series, so I was at a bit of a disadvantage (I’m still not exactly sure what kind of "criminal" Sullivan is), but for the most part it wasn’t very hard to get caught up in Rose’s world. Terri Austin has definitely used the patented Janet E. method of character development for this series. You have Rose, of course, a faithful sidekick with an oh-so-bright wardrobe, a sexy love interest and even a quirky old lady. However, Austin also recognizes that while imitation is the greatest form of flattery, plagiarism is not. Rose is not Stephanie – no cars blow up, she doesn’t get kidnapped three times in one book, it’s not chocked full of "slapstick" humor – but the book remains interesting. The characters are fun and the dialogue is witty. The only complaint I had, really, was the whole "Trekkie" storyline. Rose needed Ax’s help to solve the murder mystery, creating a "mini-mystery" subplot involving his character was just a distraction to me.
Posted by Kelly (and the Book Boar) at 9:02 AM