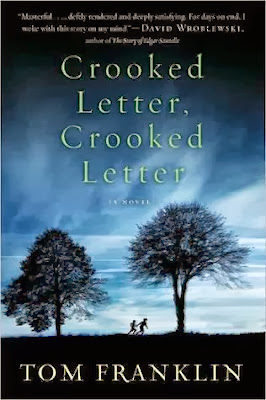 Larry and Silas grow up in rural Mississippi during the 1970s. Larry is from a middle-class white family who runs a garage, Silas is poor and being raised by his single mother – squatting in an abandoned hunting cabin on Larry’s family land. Larry prays each night for God to bring him a friend and for one magical season it happens. Larry and Silas break their parents rules and pal around together, but it soon comes to an end when Larry’s father finds out. As the boys drift apart, Silas finds himself one of the high school elite. A rising star as "32" (his baseball number) with promise of a college scholarship and a better life. Larry, on the other hand, retreats further into himself having only books for friends. When Larry gets asked on his first date, once again he hopes for a change, but the girl never returns home and everyone assumes "Scary Larry" had something to do with it.

Twenty years later Silas has returned to the Crooked Letter and is working as a constable. Another young girl has disappeared, once again no body has been found and all fingers are pointing back to "Scary Larry".

This book has very polarized reviews. People either love it or hate it, but the "hate it" crowd seems to be disappointed in the lack of thrills and chills in the murder mystery. I agree, if you’re looking for a real page turning "who killed little Tina Rutherford" you sure aren’t going to find it here. This is a book that points a giant neon arrow to the murderer right away. It’s done on purpose. You see, this book isn’t really about the missing girl at all. It’s about relationships and right and wrong and finding the bad guy within yourself. It’s written beautifully and at less than 300 pages there is absolutely no wasted paper – the story just pours out of the pages.

4.5 Stars instead of 5 because the book jacket tries to sell it as a crime novel, when it is really an EVERYTHING novel.