Whistling Past the Graveyard by Susan Crandall 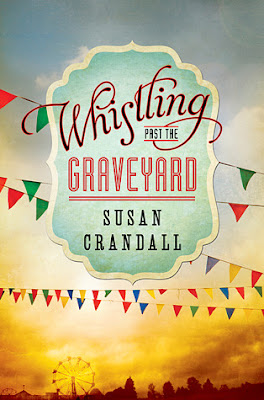 Starla has had it up to here with her grandmother, Mamie. She’s sick of being called trash and being on restriction all the time while her daddy tries to make ends meet working on an off-shore oil rig. When she finally blows her top and punches out the neighborhood bully on the 4th of July, she just can’t bear the punishment of being grounded during the big parade. Starla decides to sneak out, and when she is caught is terrified Mamie is going to send her to reform school. She’s so scared, in fact, that she runs away in hopes of finding her estranged momma, who is trying to make it as a singer in Nashville, and reunite her family. On the road in the blistering heat, she is offered a ride by a black woman who is traveling with a white baby. The three then set off on an unforgettable road trip through the 1960’s segregated South.

Let me begin by saying I’m tired of EVERY book about white/black relations in the South during the ‘60s being compared to To Kill a Mockingbird. Apples and orangutans, folks. Same goes with the modern-day classics like The Help and The Secret Life of Bees (quick recommendation – if those two are still on your “to read” list, they should both take priority over this one). If you judge this as a stand-alone book with no comparisons I would say it wasn’t bad. I whipped right through it in a few hours and it kept my attention. However, it also left me a little hollow. The storyline was more than a bit far-fetched and Starla was absolutely insufferable at times. Mamie was built up as such a tyrant with no true examples until the end, but during the course of reading I found myself thinking if Starla was MY grandkid back in the 60s, I’d probably have her cutting her own switch off the tree. She was also EXTREMELY naïve. I understand not knowing the intricacies of the Jim Crow laws at her age, but seeming so shocked by the mistreatment of the black people she came across and not realizing the dangers of getting herself in precarious situations was certainly unbelievable.
Posted by Kelly (and the Book Boar) at 11:01 AM