Is Everyone Hanging Out Without Me? by Mindy Kaling 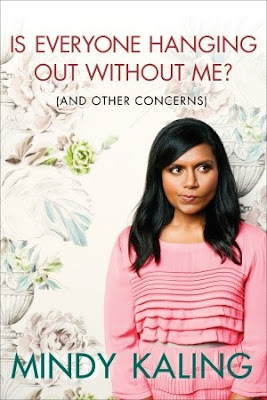 Quick confessional: 1. I am unequivocally in love with David Brent, therefore I have never cheated on him and watched even one episode of the American version of The Office. 2. The only thing I had ever seen Mindy Kaling in was that Ashton Kutcher/Natalie Portman movie that I can’t even remember the name of, but that I know I liked better when Justin Timberlake and Mila Kunis were the stars.

That being said, I wanted to read a funny comedian book and have already been through Tina Fey, Kathy Griffin, Jenny Lawson, Chelsea Handler and Sarah Silverman. (Another confession - I REALLY wanted to read Dad is Fat by Jim Gaffigan, but there’s a waiting list.) Good news is, Mindy Kaling’s book is funny (unlike Sarah Silverman’s horrible snoozer). She’s funny enough that in a state of insomnia I went on The Demand channel and queued up an episode of The Mindy Project. Highlights for me include her top funny moments of comedy (although, seriously Mindy, expand your horizons and realize that Caddyshack/Animal House/any other disgusting late 70s/early 80s comedy geared toward men is HILARIOUS), explaining to men over 30 they should not have any “flare” on the butt of their jeans and other helpful hints of how they can be great without even trying, questioning any woman who goes without underpants, reconfirming that the album Graceland by Paul Simon may be the best thing ever put on vinyl, contributing (as everyone who ever writes a comedy bio should) an Amy Poehler is the best person in the universe and oh my God I want to be her BFF story and, finally, confirming that I may have one of the most successful marriages around (although we watch Big Brother rather than The Bachelorette, we totally could come to fisticuffs back in the day if one ever dared watch an episode of The Sopranos without the other and we high-five our mutual awesomeness quite frequently).
Posted by Kelly (and the Book Boar) at 10:50 AM