One Last Thing Before I Go by Jonathan Tropper 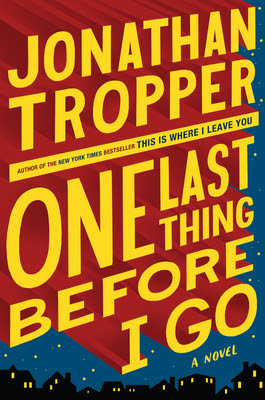 Yeah, so I’m pretty much completely enamored with Jonathan Tropper. I read "This is Where I Leave You" and was smitten – immediately followed by the fear that he might be a one-hit wonder. Thankfully, that turned out not to be the case and now I’m completely head-over-heels in love with his writing. He writes good people and lots of them. People I want to know in real life. People I can picture vividly while reading their stories. People I want to call up six months from now to check on and see how they are doing.

Silver is an aging former rock star whose one constant in life is failure. Failed rock career, failed marriage, failed parenting, etc. On the cusp of his ex-wife’s impending nuptials, his teenage daughter confides in him that she is pregnant and Silver discovers he has a medical condition that may kill him. The story that follows is a couple of unforgettable weeks with a rag-tag ensemble cast that won’t soon be forgotten.
Posted by Kelly (and the Book Boar) at 9:54 AM