Me Before You by JoJo Moyes 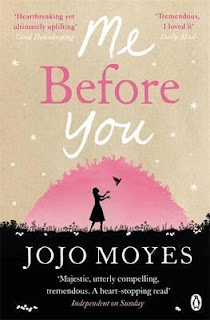 Lou Clark is an uneducated 27 year old who has just lost the only gainful employment she’s ever had. When the unemployment agency tells her that her options consist of working at the local chicken processing plant, becoming a stripper, or being a caregiver for a "difficult" 35 year old quadriplegic for six months, she takes the latter. During those six months Will and Lou will discover that the most unlikely person can sometimes change EVERYTHING about your life.
Posted by Kelly (and the Book Boar) at 8:36 AM