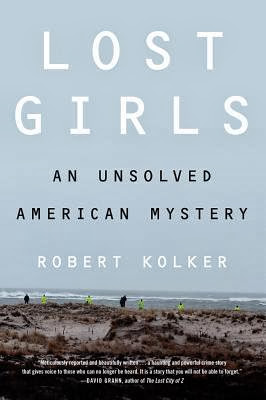 
I was struggling a bit with insomnia back in 2010 when Shannan Gilbert’s bizarre 911 calls made the news (a surefire way to get to sleep is some Nancy Grace – just sayin’). Although I didn’t intentionally follow the story, I also recall when the burlap-wrapped bodies started being discovered on Oak Beach and the fact that all of these women were escorts who advertised on Craigslist and were not local to Long Island, yet somehow took jobs out of their normal territory that would ultimately lead to their demise.  Like all rating-grabbing stories, this one soon faded from the news and was replaced by some other shocking tale.  When I saw a book had been released, I was immediately intrigued.

If you are like me and prefer your non-fiction to read like fiction, this is a great choice. The story itself is hypnotizing and the research put in to this book is outstanding. No stone was left unturned by Mr. Kolker. He does an amazing job of laying out the facts as they are known and using only individual’s own words rather than drawing any conclusions. Amazing that, at the end of it all, so much seems to point in such a narrow direction and yet nothing has really been done to close these cases. Are these girls worth so little just because of their chosen profession?