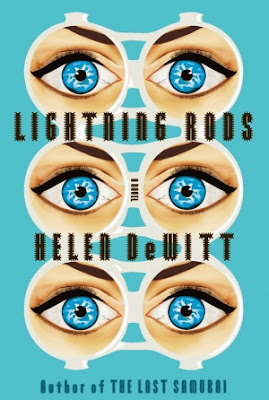 
Joe, stuck in a dead-end job selling vacuum cleaners, spends most of his days perfecting his masturbatory fantasies. In an effort to "build a better mousetrap," Joe comes up with an ingenious method of eliminating sexual harassment claims in the workplace. The idea? Lightning Rods. Women, who on the surface appear to be perfectly capable/qualified support staff, but are also willing to take one for the team, if you will.

I love good satire. A little darkness, some taboo – I feed on books like that every once in a while. Sadly, Lightning Rods missed the mark. The idea behind the book is one of sheer genius and there are brilliant moments when you hear a snippet of what became of characters or ideas that were laugh out loud funny. Unfortunately, they were literally moments. Ms. DeWitt gets so bogged down in the invention process that she fails to develop a main character that you know much of anything about and the remaining cast of characters are nearly as invisible as the converted bathroom stalls from which they emerge to serve their purpose as Lightning Rods.