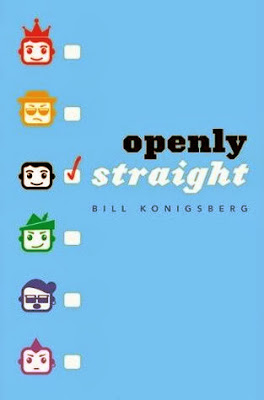 4 Stars
Being gay isn’t a choice, but being out definitely is one. Raised by some seriously hippie-dippie parents, Rafe’s coming out was a breeze. We’re talking the school held a special celebration, his mother became the president of the local PFLAG and Rafe began traveling to different schools in the area to mentor other kids. It was wonderful – until Rafe became JUST the gay guy. No one except his best friend, Claire Olivia, was interested in just knowing HIM – they always wanted to know the GAY him. In an effort to shed all labels, Rafe transfers across the country to an all-boys boarding school. There he will play soccer, study hard in hopes of getting accepted to an Ivy league college and have a chance to just be Rafe. The plan of being "openly straight" and not discussing his sex life works out great, until he starts developing deeper feelings for one of his teammates.
Now let me tell you what I thought of this book:

"Did you know that LGBT kids are 8.4 times more likely than straight kids to attempt suicide? And 50 percent of LGBT kids are rejected by their parents? That between 20 and 40 percent of homeless teens say they’re gay, lesbian, or transgender, and that up to 50 percent of the guy teens have sold their bodies to support themselves?"
I have no idea of the above statement is true or not. It’s a quote from the book and the stats seem realistic. I can’t imagine how hard it must be to come out – to be labeled by many without them even knowing you. That’s why books like "Openly Straight" resonate so deeply with me. This book pushes no agenda – it’s just what a romantic comedy YA book should be. It shows that characters come in all varieties – funny, sympathetic, even vile. A memorable character is a memorable character, a good author is a good author, and a good book is a good book. This is a good book. It was adorably funny and made me have some feely-feels too.
"Perhaps the best answer is not to tolerate differences, not even to accept them. But to celebrate them. Maybe then those who are different would feel more loved, and less, well, tolerated."