The Book of Joe by Jonathan Tropper 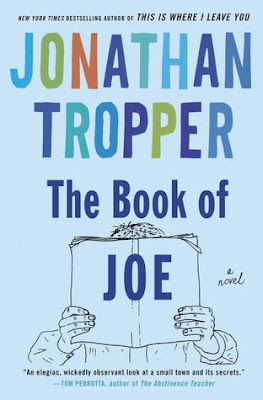 Joe Goffman is a self-described asshole. He’s such an asshole that he wrote a scathing "fictitious" novel about his hometown where he completed lambasted nearly everything and everyone contained there. He never dreamed the book would become not only a national sensation, but also an A-List movie starring Leonardo DiCaprio and Kirsten Dunst. He REALLY never dreamed he’d have to go back to said hometown and face the subjects of his novel. However, when his father suffers a stroke, that’s exactly what he has to do.
Boy am I regretting my decision to keep requesting Tropper’s books from the library. I was like a junkie and just couldn’t get enough . . . and now I’ve read them all. "Joe" was Tropper’s sophomore novel, and it is where he came into his own. He hit the mark with the self-deprecating "asshole" lead and his merry band of friends/family. He found that magical balance of quick wit balanced and heart-stabbing emotion and has used it in every novel written from "Joe" on. HURRY UP AND MAKE THESE MOVIES!!!!!