Everything Changes by Jonathan Tropper 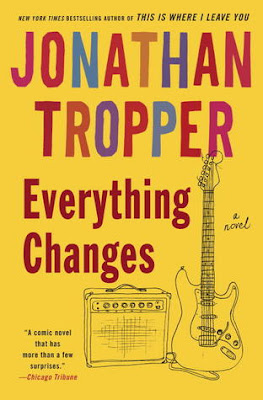 Everything changes for Zack when he wakes up one morning and discovers blood in his urine. While waiting for his biopsy results to come back, Zack deals with his lackluster career, an absentee father who decides to make his re-entry into the family after being gone for 20+ years, his upcoming engagement party, and the fact that he may be in love with his best friend's widow.

Like all Tropper books, Zack is kind of a loveable loser and is surrounded by an unforgettable ensemble cast. While I'm sure this spiel gets stale for some, it never does for me. Tropper has me laughing one minute and crying the next. He never ceases to create a cast that I want to know more about. This one had a couple of lulls in the storyline compared to his others, so it's getting 4 stars instead of 5, but I still absolutely adored it. Once again, Warner Brothers has optioned this book for a movie and I think all of his books will translate to film remarkably well.
Posted by Kelly (and the Book Boar) at 11:06 AM